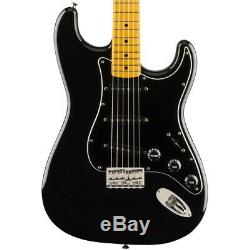 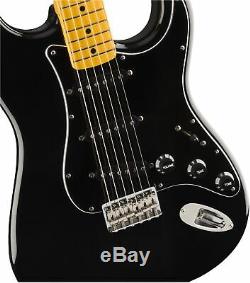 This Limited Edition Fender MIJ (Made in Japan) Traditional Hardtail Stratocaster is presented in Black with Rosewood fretboard. With only 125 pieces produced, this guitar will allow a select few to experience that legendary Japanese build quality applied to a classic Stratocaster variant. The black on black finish gives the guitar a svelte appearance, while the Vintage-Style pickups and 7.25 radius fretboard lend it period-correct looks and feel. Supplied in a Fender Gig Bag. We pride ourselves in our pre-sales check and professional set-up, which we carry out on every instrument we sell here at Merchant City Music.

This ensures that the Limited Edition Fender Made in Japan Traditional Hardtail Stratocaster you receive from us will always be playing and looking its best, with no nasty surprises when it reaches your door. Fender MIJ Limited Edition Traditional Series Hardtail Stratocaster Black. It's no exaggeration to say that Fender's MIJ models are consistently among the very finest guitars we have in stock.

Even today, with increased availability in the West, supply is more patchy than with models produced in, say, North America. Combined, these factors produce a range of guitars for which our staff have a particular soft spot. This is only increased with Limited Run models such as this Traditional Series Hardtail Strat, of which only 125 will reach player's hands. This guitar's foundation is an American Basswood body, imbuing it with a lightness and musicality which suits the Strat perfectly. To this is bolted a "U"-Shape Maple neck, topped with a 7.25-radius Rosewood fretboard.

The feel is thus traditional, as the series name implies, a theme continued by the three Vintage-Style Single-Coil Strat pickups. This guitar's unique feature is, of course, the hardtail bridge. Six stainless steel saddles provide precision intonation, while the simplicity of the setup allows the player to focus on the joy of navigating that stunning Rosewood fretboard with its finely-finished Vintage frets. The Limited Edition Fender MIJ Traditional Series Hardtail Stratocaster in Black is one classy instrument which will appeal to the connoisseurs out there!